When one teaches, two learn

Situations that force us to explain something in a simple fashion make us realize that our understanding is not as deep as we imagined. Ensuring that such situations are naturally abundant is the biggest challenge in education. Being a part of a cohort where learning is mutual and peer driven removes any friction from the learning experience. When the learners, kids or adults, assume ownership of their learning, their motivations are untainted, implicit. 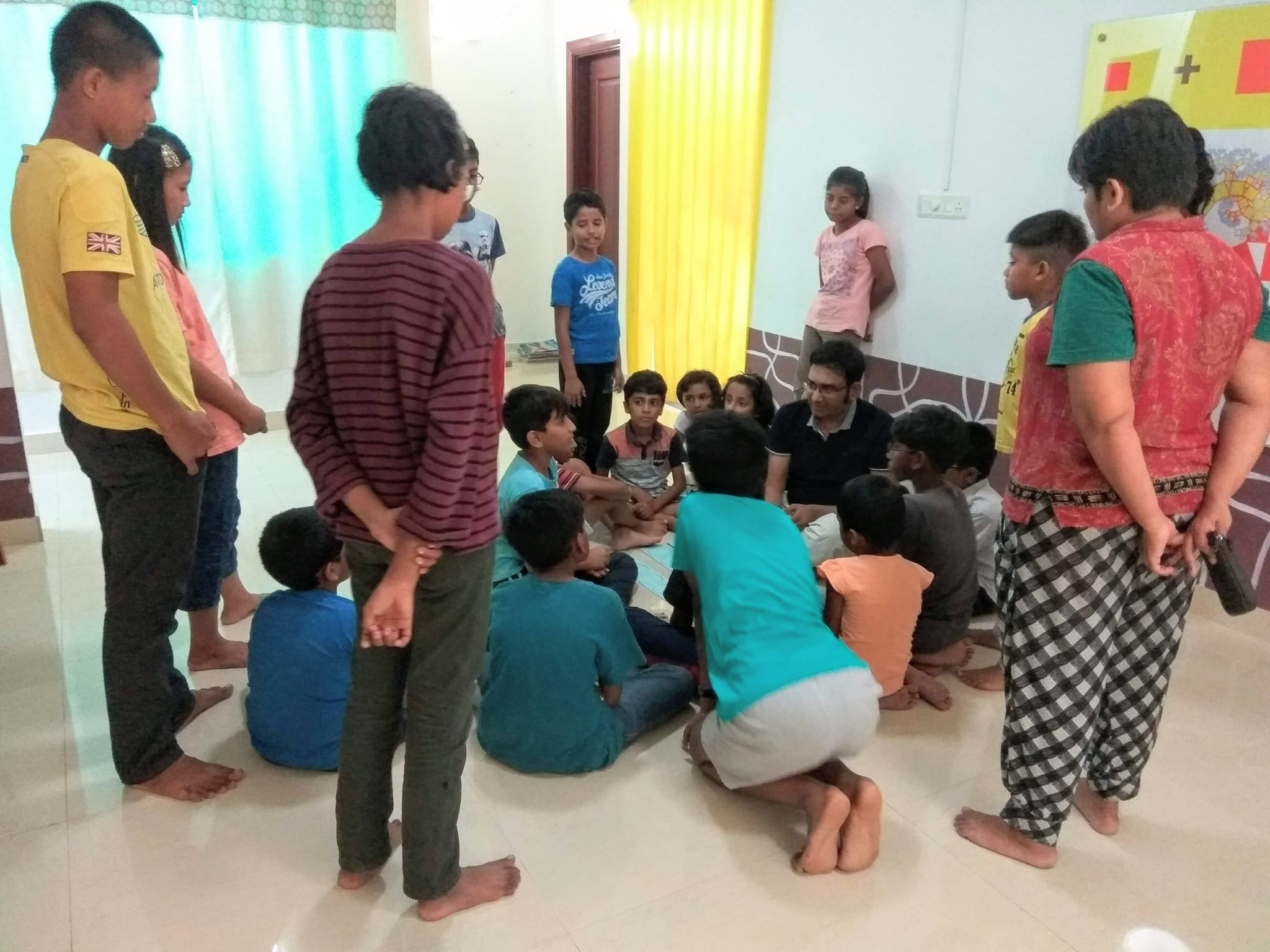 Many of our members have a new hero in James Tanton. He is now a household name among our members. The reason is not hard to decipher. Exploding dots fantastically offers autonomous learning. Autonomous learning of Math that kids like to hate. What better way to reinforce that learning than to create a situation where they are forced to explain what they had learnt.

No carrot, no stick, just Math with seeds and shells

Some of our members had the time and resources to go deep into the exploding dots videos and islands. On our third day of Global Math Week, they took on the mantle of “puthiralis” to explain their understanding of arithmetic through exploding dots. Only guidance we gave them was to focus on the idea instead of the mechanics. 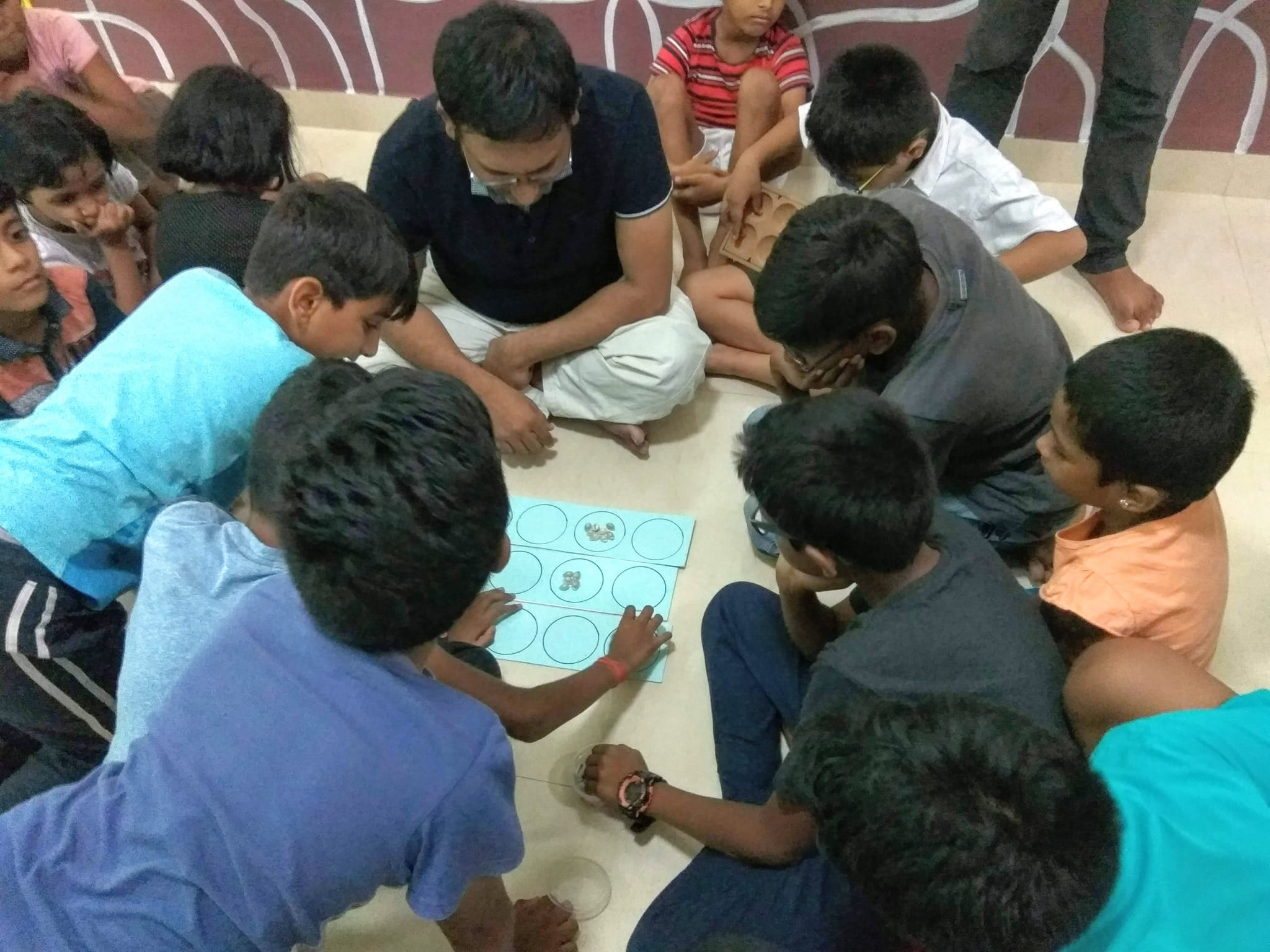 We started with addition on a 1 ← 10 machine. We moved onto other machines for the same set of numbers. We had our junior and senior members together for this discussion. 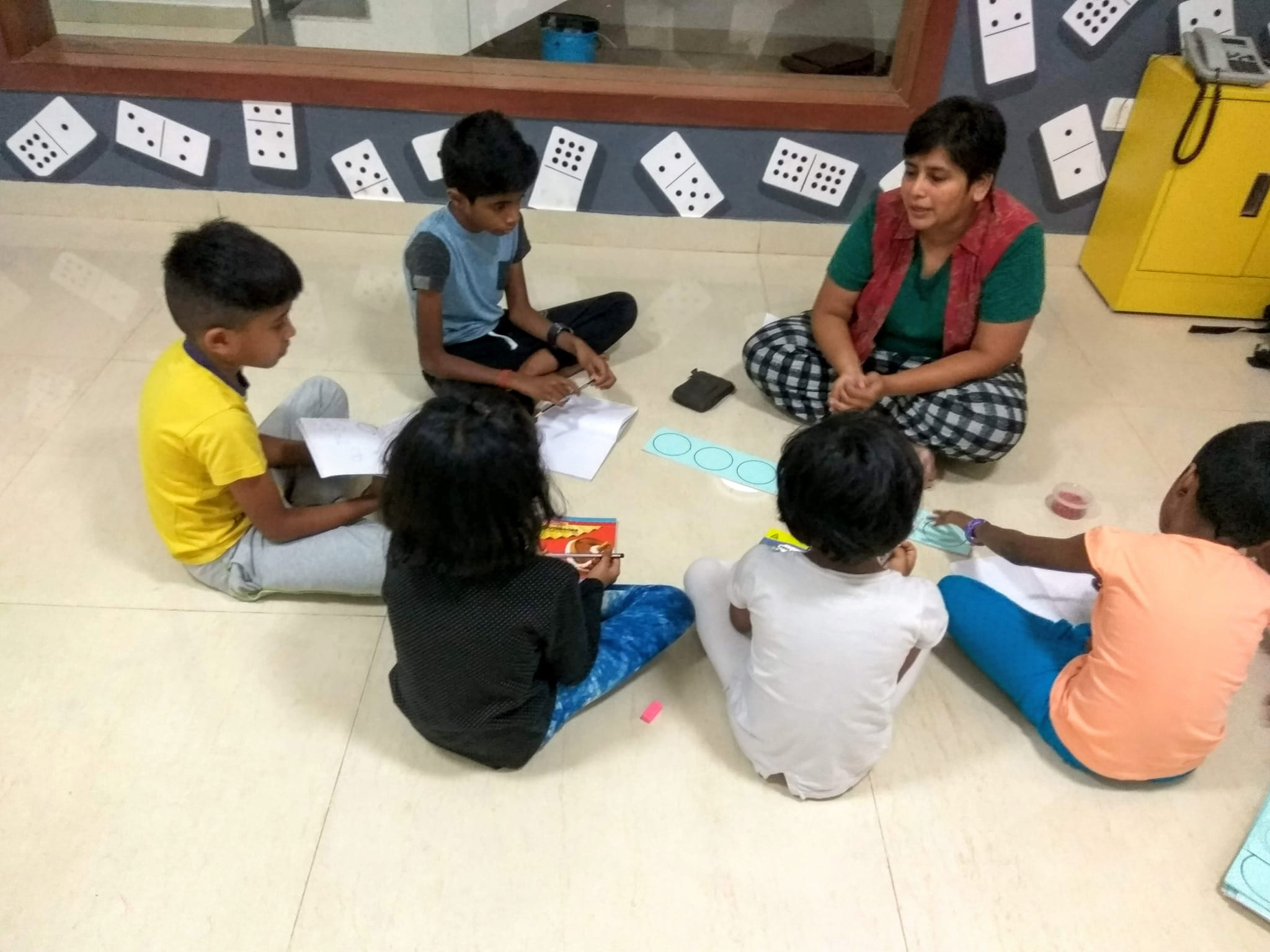 Once addition was complete, our junior members headed downstairs to explore it further. While the senior members did more addition with other machines, the question was how do we verify if the answer was correct.

We proceeded with a brief interlude into converting one machine to another. This was a good way to bring in the concept of un-explosions while we verify the answers. We were fascinated to learn that un-explosions were not quite intuitive for most of the kids. The duality of the 10 dots moving to the left to make one and one dot moving to the right making 10, had to be walked through multiple times. 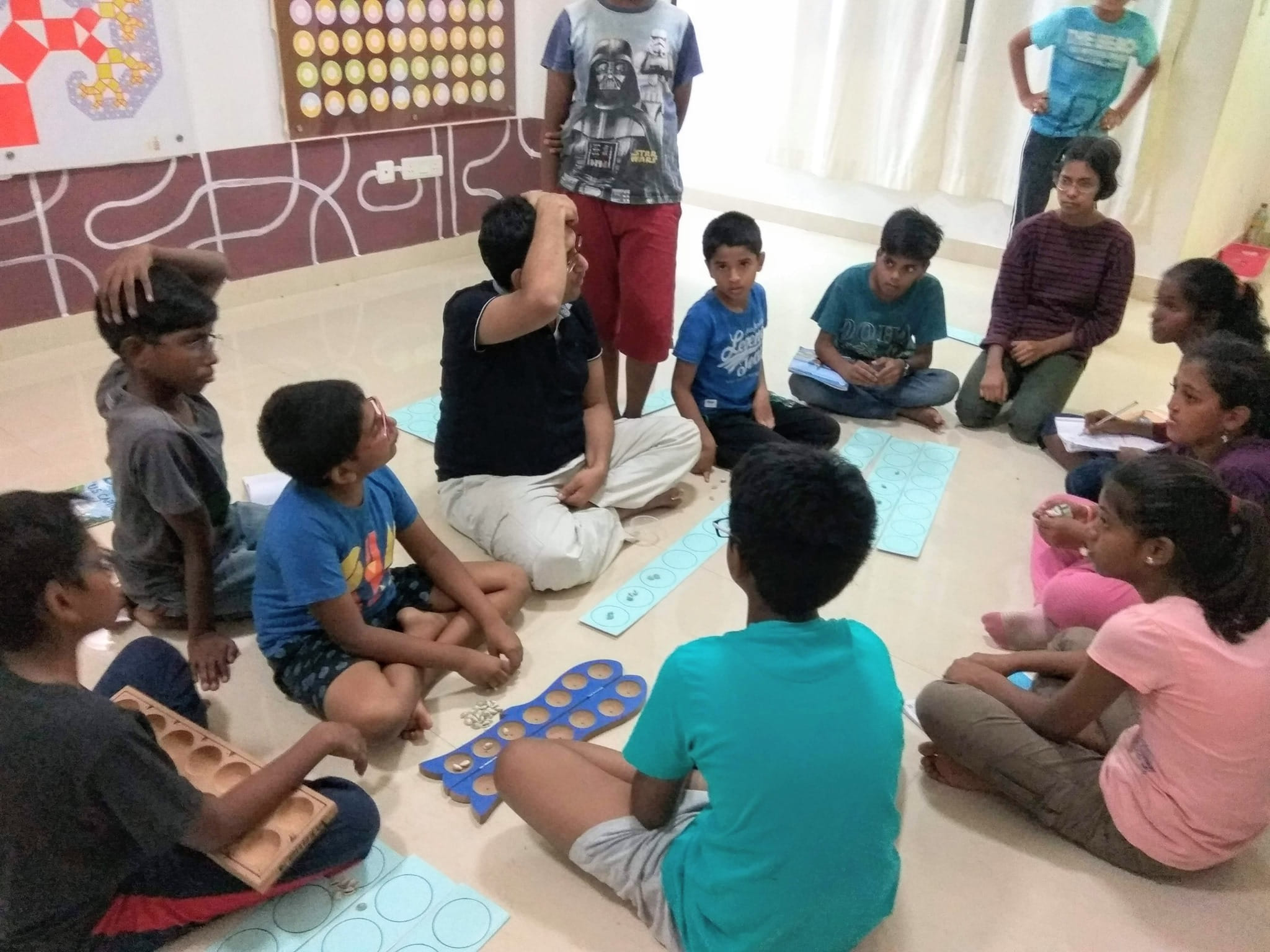 We moved on to subtraction. The most interesting discussion here was about why it is not okay for one box to have anti-dots and one box to have dots in the result. While we didn’t quite get to “its inconvenient”, we reached “it doesn’t make sense”. 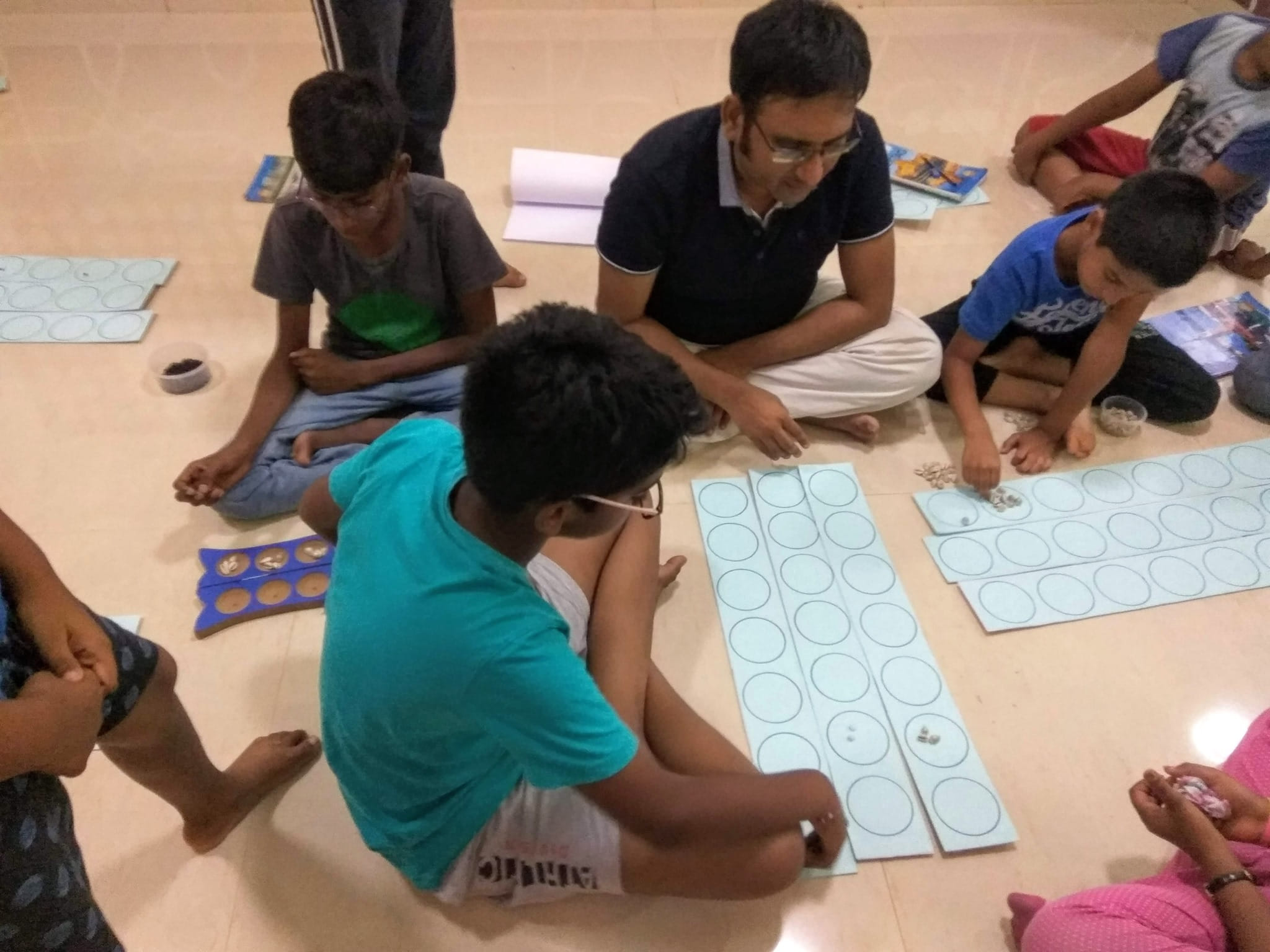 Our members took turns to explain their understanding to their peers. 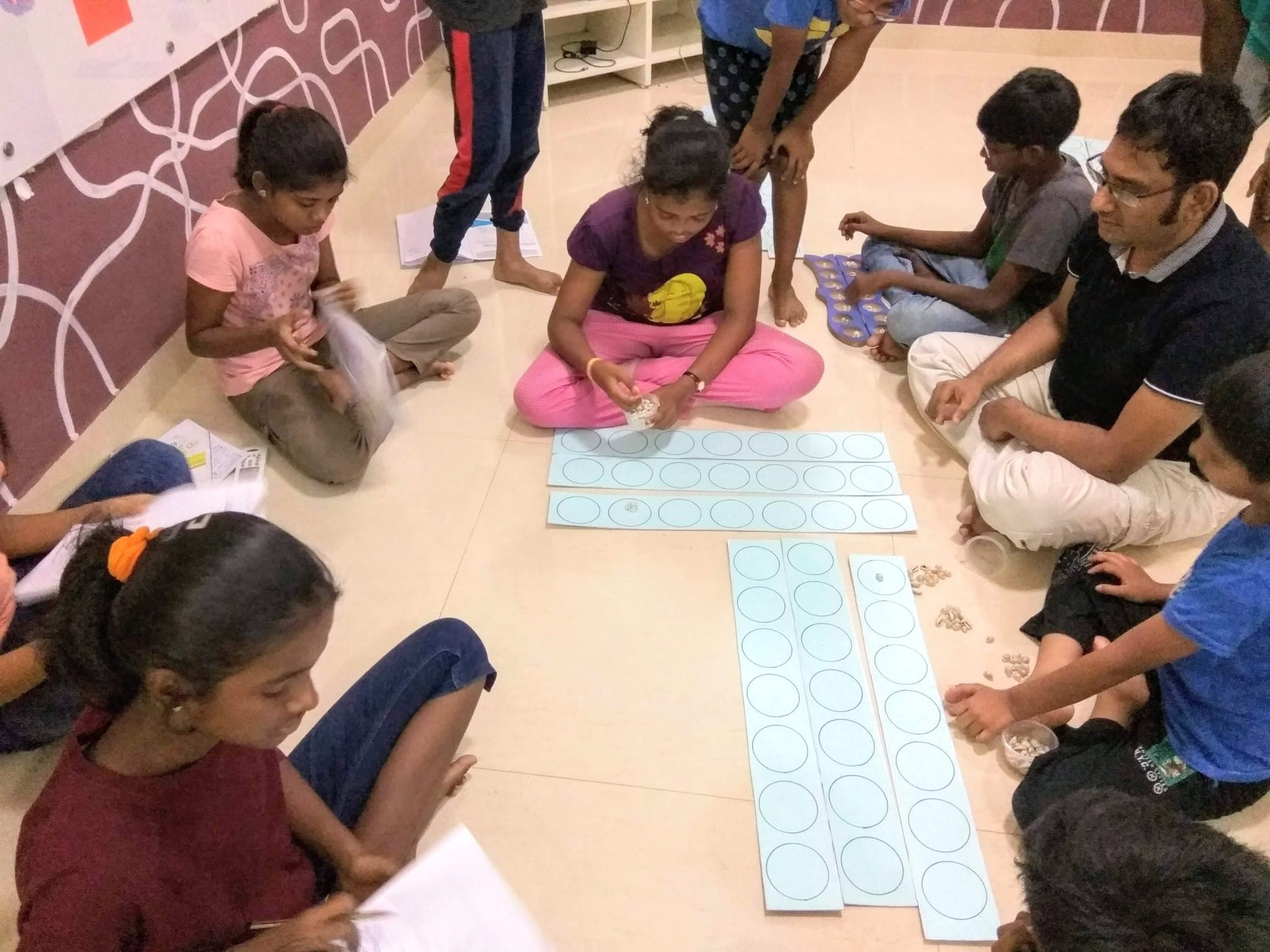 As we went through larger and larger numbers, the tedium and error prone nature of the physical environment began to manifest and our members resorted to pencil and paper. 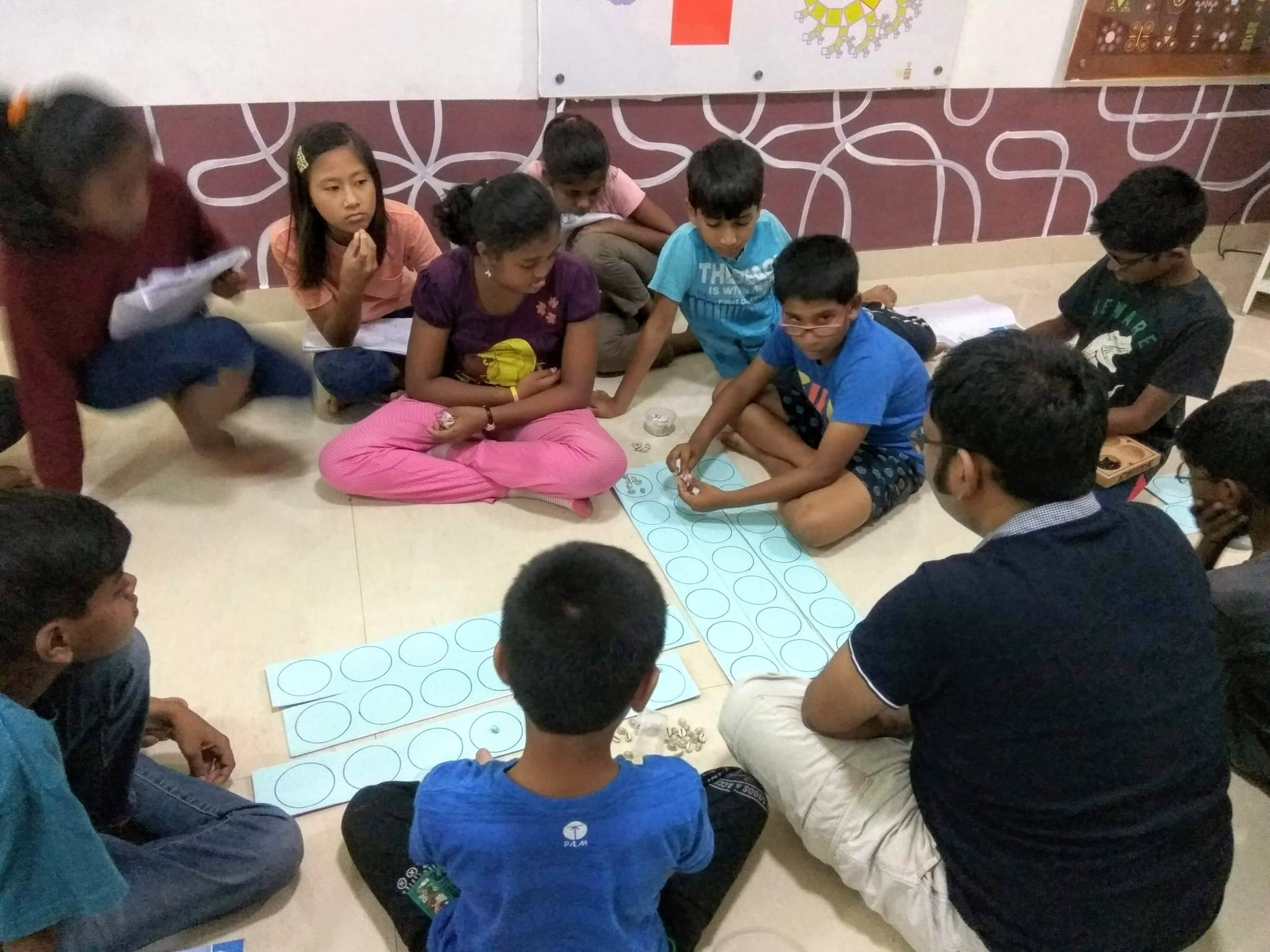 When there is sufficient engagement, discussions are abundant. 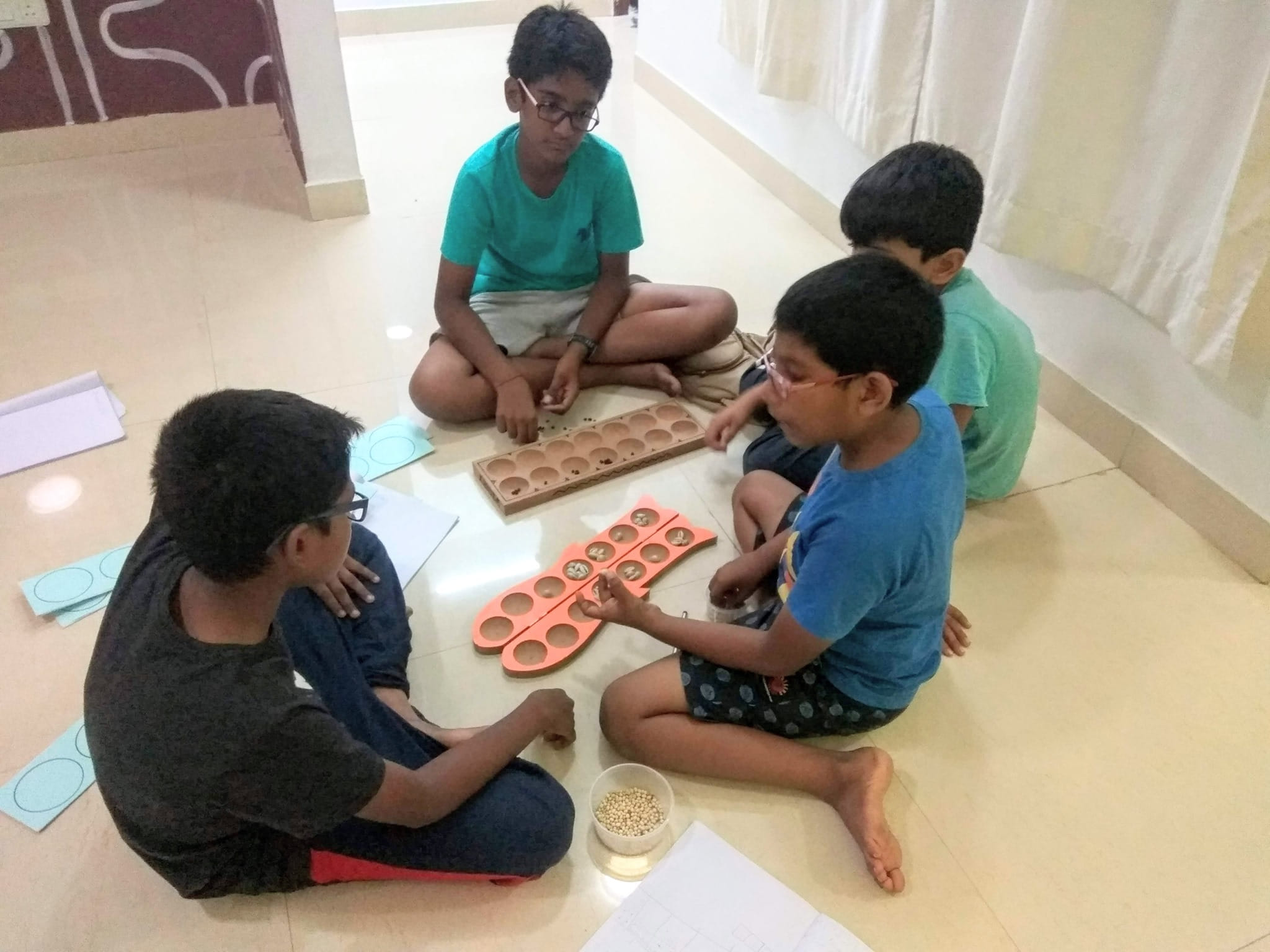 While our senior members took on harder challenges our junior members went on an explorative journey of their own.

Some of the younger members joining us after vacation got introduced to the machines and instantly took to them and began their exploration. Some had gotten well into the islands on the exploring dots website and went deeper with arithmetic. 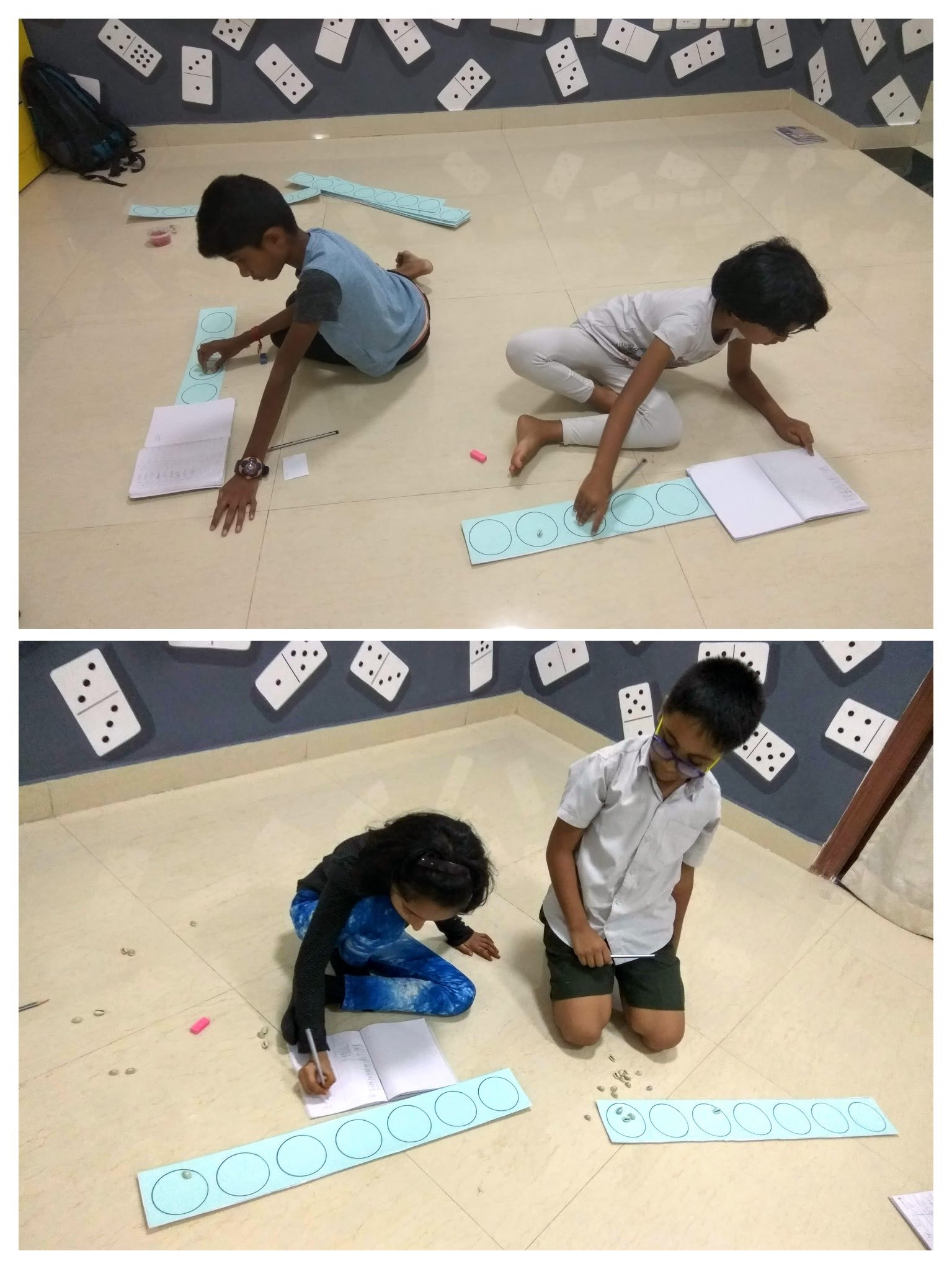 Some identified the pattern and began writing it instead of using the shells. Some couldn’t get enough and asked their parents to come back later as they continued with their explorations. 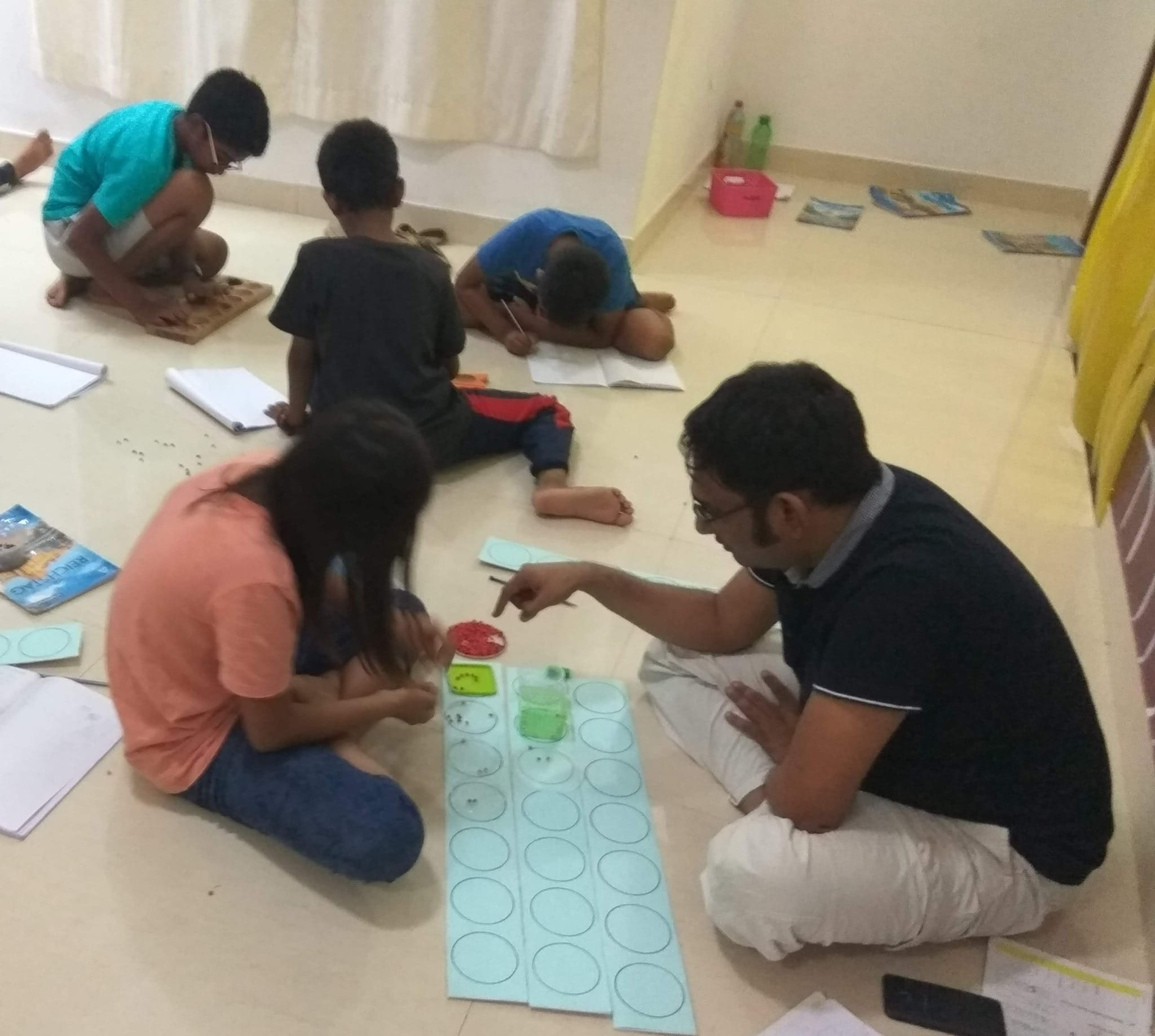 Math is a language and the window it opens not only gives us a glimpse of a wonderful world but also brightens it because we are able to see it better. 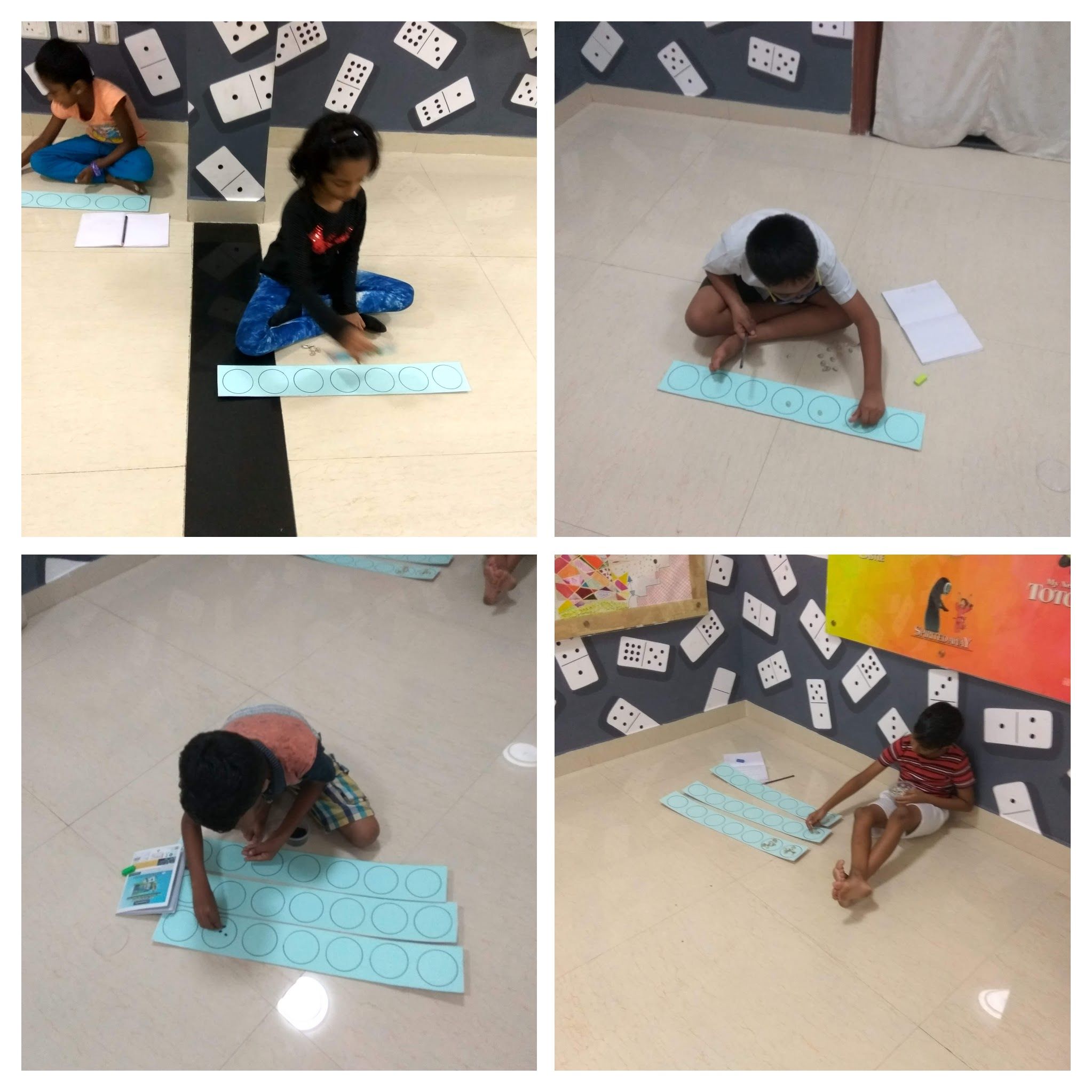 As we are looking forward to one last session at Puthir celebrating the Global Math Week, we can’t shake off the feeling of how fantastic it would be if every math session looks like this. We are hoping that events like this raise awareness among educators and parents that learning can and should be joyous