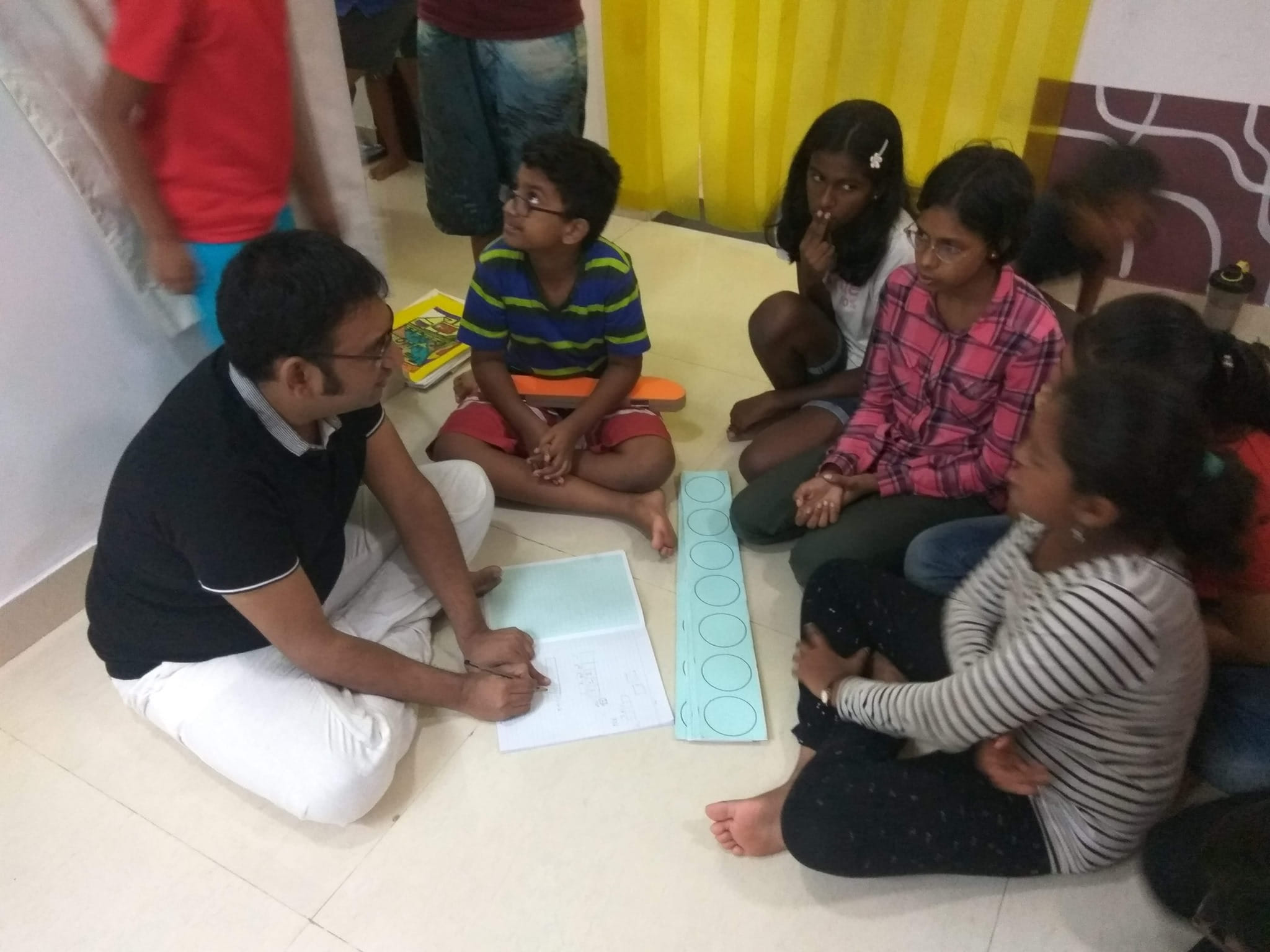 The problem with X

The islands in exploding dots take a steep leap from division to algebra. Most of our members (Grade 6, 11 yo) decided that it was beyond them. Our opinion is that the content is well within their grasp, but their lack of knowledge and introduction to algebra were hindering their progress. It was time to quell their fears.

Introducing the concept of a variable

Most activities at Puthir begin with a story and this one was no different. A very relatable, light hearted story that equated the number of chocolates received as incentive as a factor of the percentage of marks obtained grabbed the attention of our members. 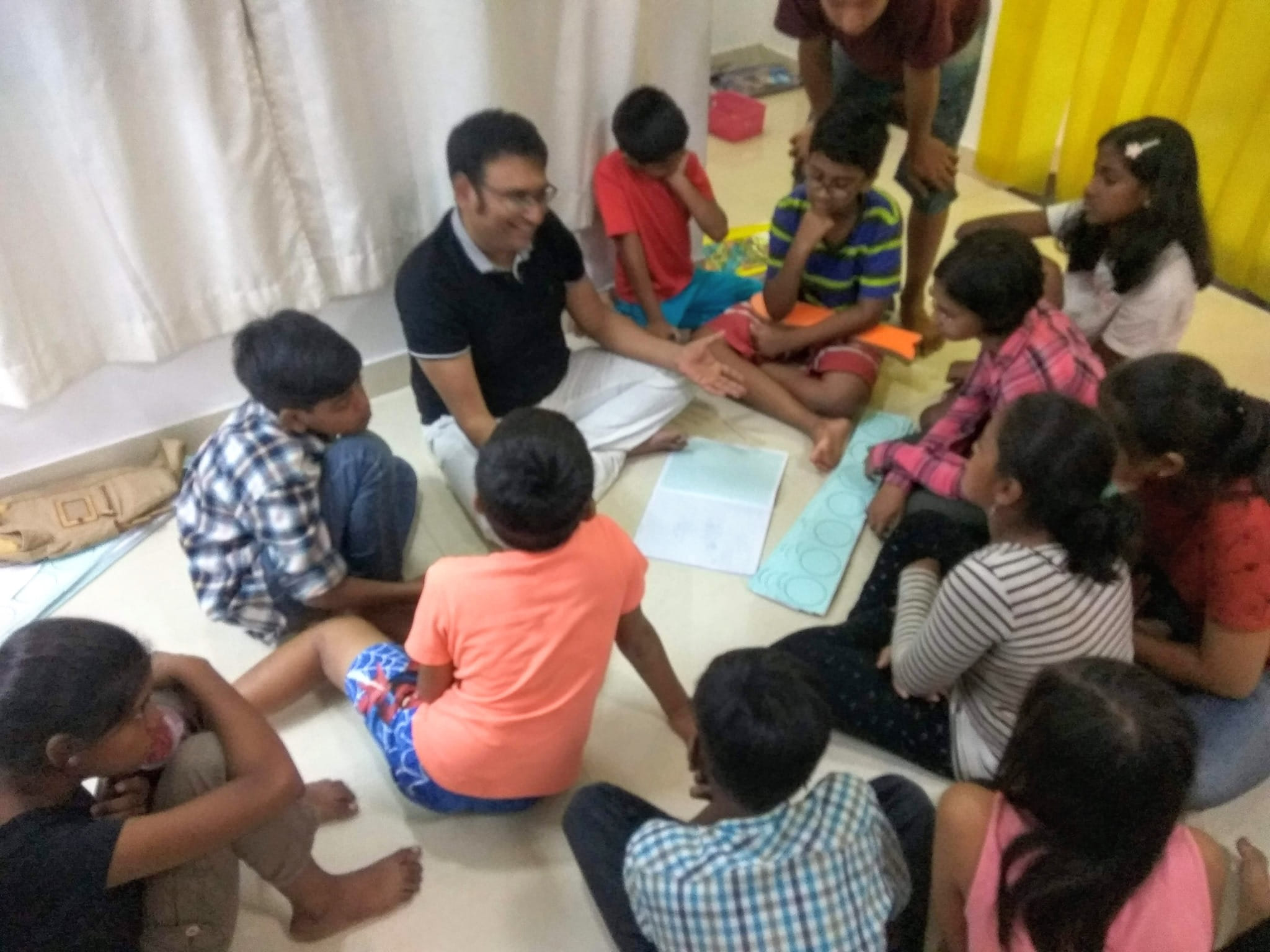 Once we had their attention, it was time to graph it out. That variables allow us to operate on unknown values became clear through the story followed by a series of questions. That the variable allows us to plot a graph of possible results brought home the idea.

The solution with X

Once the concept of a variable was established, it was time to get back to exploding dots. We could now talk about “any” machine. We began by relating the value of each dot in a box with a potentially unknown number. After a few iterations and questions, we were able to come to a loose agreement that the pattern was 1, x, x^2, x^3 … This will need to be reinforced and reiterated.

Necessity is the mother of discovery 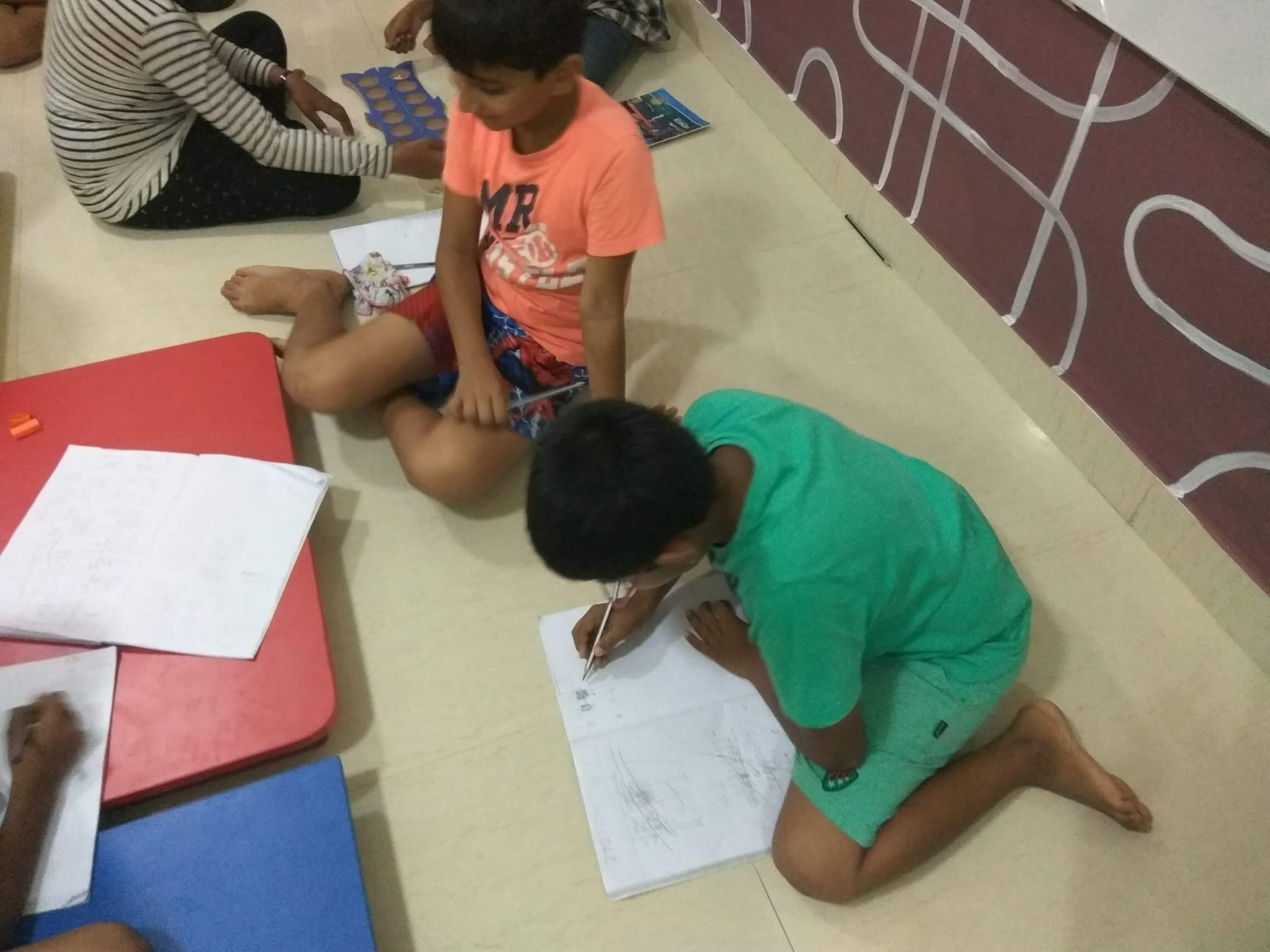 In going through the tedious process of evaluating the results, some of them figured out the mechanics and proceeded quickly. Once the 10 values were done, we reminded them about the story and asked them, what if we don’t tell you what machine it is? What would be the value of [ 2 ] [ 7 ] [ 6 ].

Since they had the resulting values of [ 2 ] [ 7 ] [ 6 ] for each of the machines, verifying their formula was a matter of simple substitution. They went through several iterations before coming up with the correct equational representation (without any direct hint or suggestion - just questions and guidance towards verification). 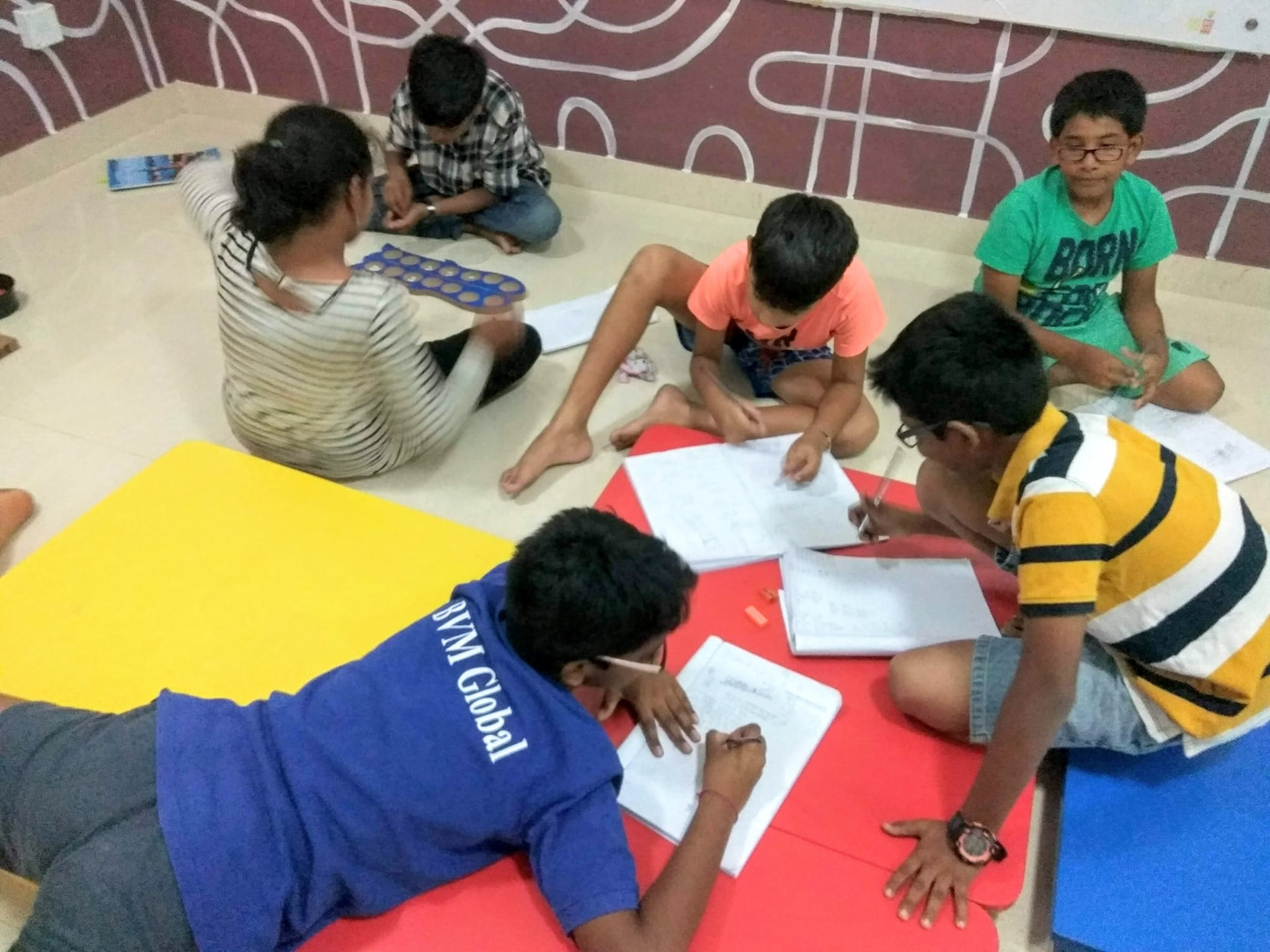 With our members deeply poised with the idea after multiple iterations resulting in the self-discovery of the equation, they were ready to handle the polynomial division. ![2 hours of intense math] (/assets/images/posts/exploding-dots-and-accelerated-learning/intense.jpg “2 hours of intense math”) When they found the resultant equation by using the exploding dots division mechanism, we went through the process of evaluating the division for other machines using the formula that came up with and arithmetic. When the results matched, there were a few minutes of awe induced, jaw dropping silence. Math induced joyful wonder.

Curtains down, but the show continues

While our seniors accelerated towards algebra, our juniors continued their exploration of the machines and arithmetic. 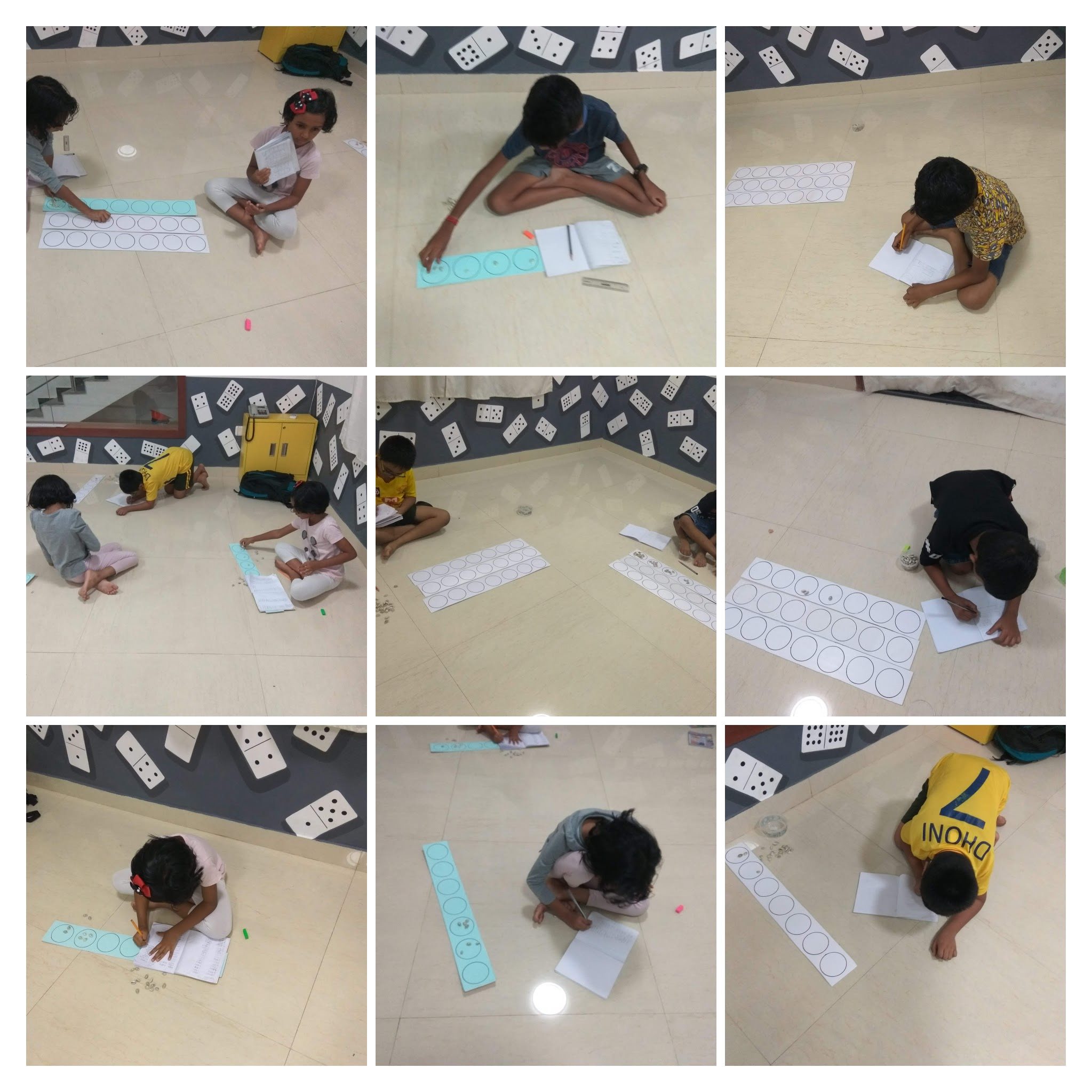 Celebrating global math week has been momentous for us and our members at Puthir. We cannot thank James Tanton and the global math week community enough for this amazing resource. This week will have a lasting impact on these budding minds and hopefully trigger a butterfly effect where the joyous wonder of mathematics they experienced infects people that they touch.